Types of PCA in Biology

PCA in smartpca from EIGENSOFT:

EIGENSTRAT use 0,2 for two homozygous alleles and 1 for heterozygous sites.

Calculating PCAs for aligned sequences
Jalview can perform PCA analysis on both proteins and nucleotide sequence alignments. In both cases, components are generated by an eigenvector decomposition of the matrix formed from the sum of substitution matrix scores at each aligned position between each pair of sequences - computed with one of the available score matrices, such as BLOSUM62, PAM250, or the simple single nucleotide substitution matrix.

?princomp
The calculation is done using ‘eigen’ on the correlation or covariance matrix, as determined by ‘cor’. This is done for compatibility with the S-PLUS result. A preferred method of calculation is to use ‘svd’ on ‘x’, as is done in ‘prcomp’.

?prcomp
The calculation is done by a singular value decomposition of the (centered and possibly scaled) data matrix, not by using ‘eigen’ on the covariance matrix. This is generally the preferred method for numerical accuracy.

Alternating least squares (ALS) algorithm. This algorithm finds the best rank-k approximation by factoring X into a n-by-k left factor matrix, L, and a p-by-k right factor matrix, R, where k is the number of principal components. The factorization uses an iterative method starting with random initial values.
ALS is designed to better handle missing values. It is preferable to pairwise deletion (‘Rows’,’pairwise’) and deals with missing values without listwise deletion (‘Rows’,’complete’). It can work well for data sets with a small percentage of missing data at random, but might not perform well on sparse data sets.

Why PCA of data by means of SVD of the data? – a discussion of what are the benefits of performing PCA via SVD [short answer: numerical stability].
–http://stats.stackexchange.com/questions/134282/relationship-between-svd-and-pca-how-to-use-svd-to-perform-pca

See PCA / EOF for data with missing values - a comparison of accuracy.

Not all Principal Component Analysis (PCA) (also called Empirical Orthogonal Function analysis, EOF) approaches are equal when it comes to dealing with a data field that contain missing values (i.e. “gappy”). The following post compares several methods by assessing the accuracy of the derived PCs to reconstruct the “true” data set, as was similarly conducted by Taylor et al. (2013).

The gappy EOF methods to be compared are: 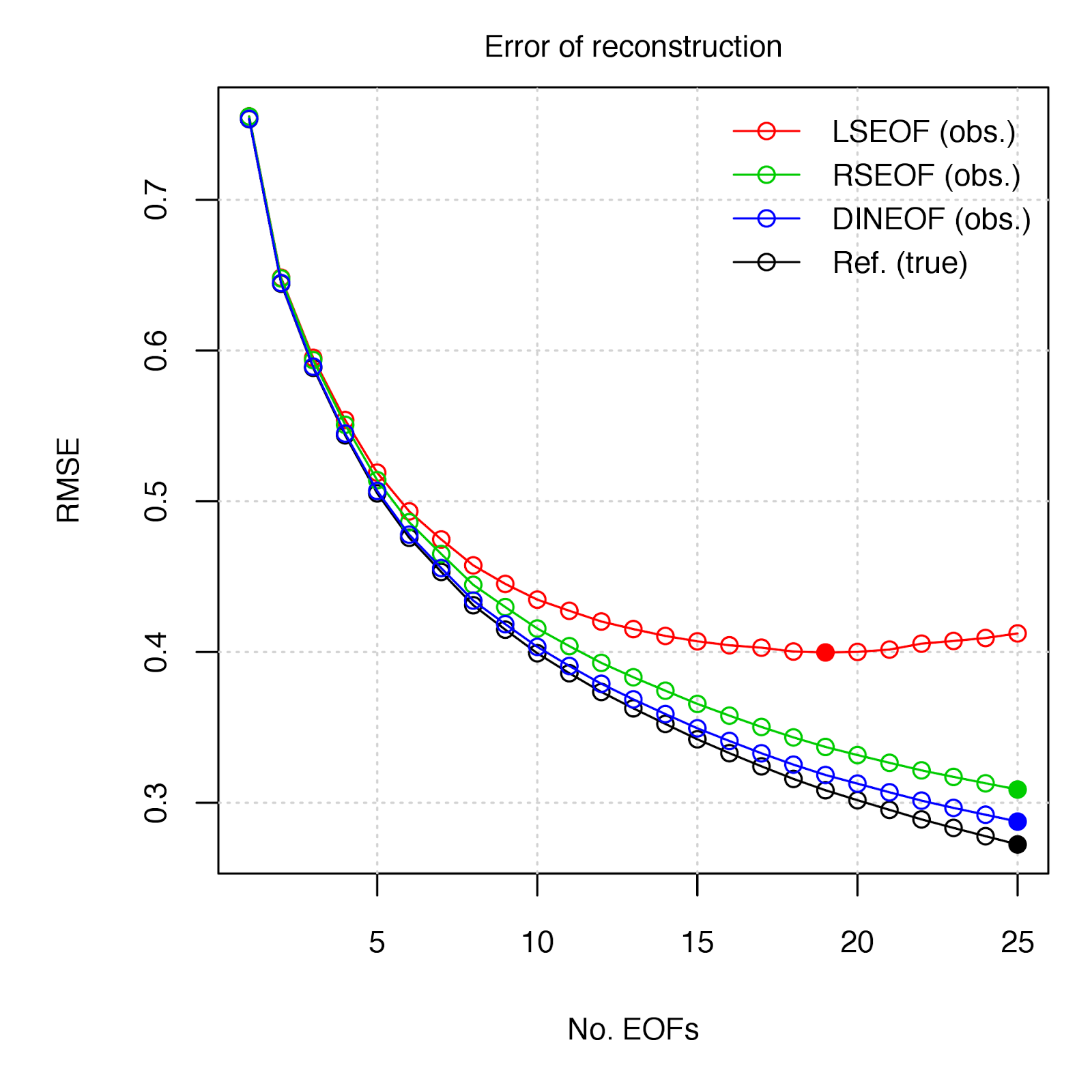 All analyses can be reproduced following installation of the “sinkr” package: https://github.com/marchtaylor/sinkr 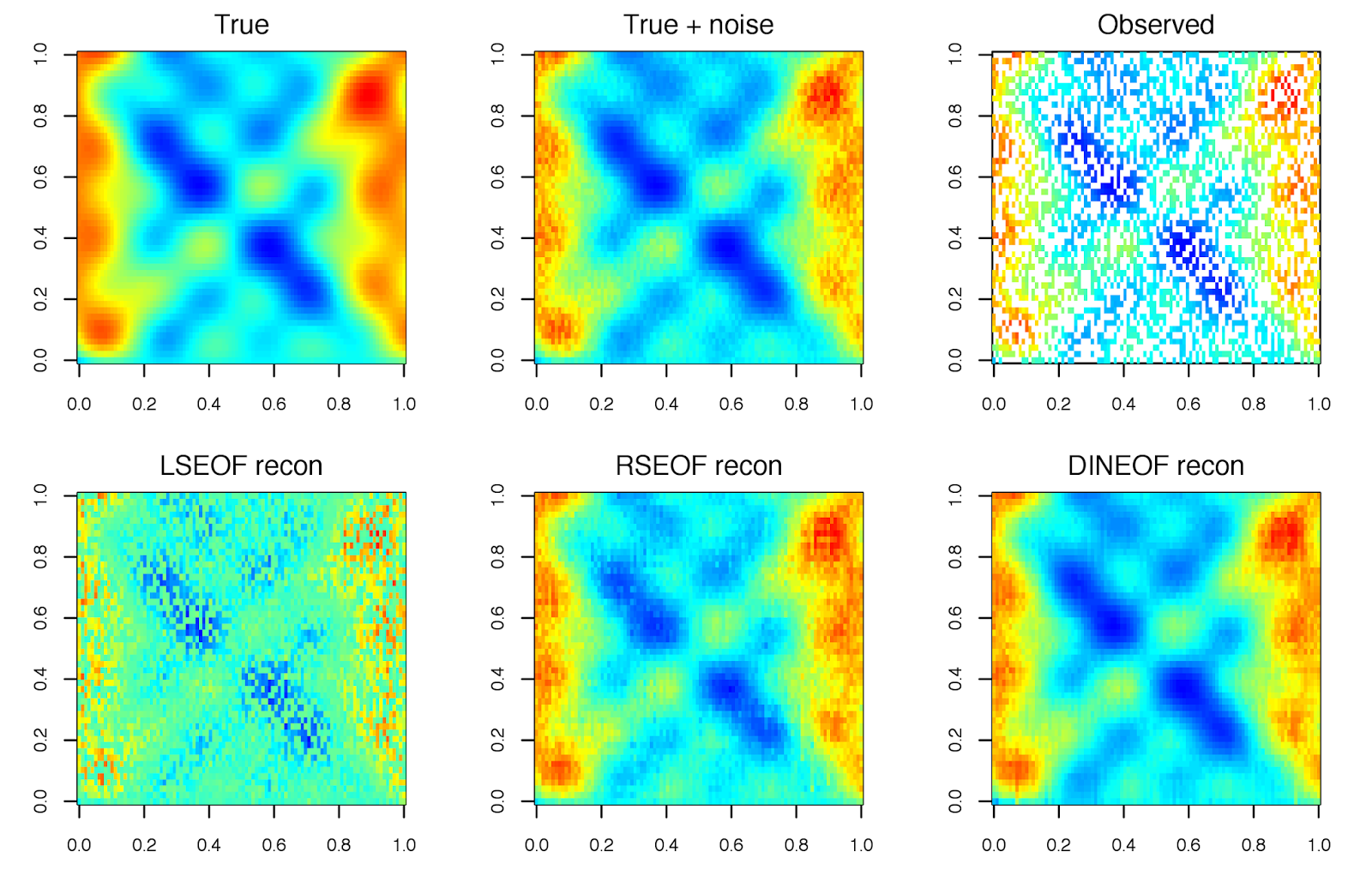 The DINEOF method appears to be a good choice in the estimation of EOFs in gappy data. One is obviously not going to have a “true” data set by which to gauge the relative performance of approaches, but given the guidelines of selecting reference values, DINEOF should perform well under most cases. The RSEOF method also does a good job in correcting for the issues of LSEOF, and is also much less computationally intensive than DINEOF - In the SLP example, deriving 25 EOFs from the data field (dimensions = 1536 x 451) took 68 sec. with DINEOF vs 14 sec. with RSEOF (~20% of the time).